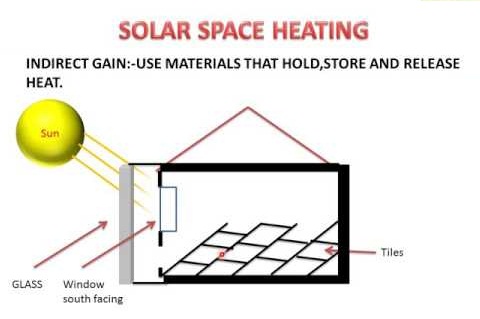 Just as solar energy can heat the water for a building, it can also heat and cool the air.

Passive solar space heating takes advantage of warmth from the sun through design features, such as large south-facing windows, and materials in the floors or walls that absorb warmth during the day and release that warmth at night when it is needed most. A sunspace or greenhouse is a good example of a passive system for solar space heating.

Passive solar design systems usually have one of three designs:

Active solar space-heating systems consist of collectors that collect and absorb solar radiation combined with electric fans or pumps to transfer and distribute that solar heat. Active systems also generally have an energy-storage system to provide heat when the sun is not shining. The two basic types of active solar space-heating systems use either liquid or air as the heat-transfer medium in their solar energy collectors.

Liquid-based systems heat water or an antifreeze solution in a hydronic collector. Air-based systems heat air in an air collector. Air-based solar heating systems usually employ an air-to-water heat exchanger to supply heat to the domestic hot water system, making the system useful in the summertime. Both of these systems collect and absorb solar radiation, then transfer the solar heat directly to the interior space or to a storage system, from which the heat is distributed. An auxiliary or backup system provides heat when storage is discharged. Liquid systems are more often used when storage is included.

Here is a summary of the many different types of active solar space-heating systems:

a) Buildings that require much outdoor ventilation, such as warehouses, large manufacturing plants, and airplane maintenance hangars;

Cooling and refrigeration can be accomplished using thermally activated cooling systems (TACS) driven by solar energy. These systems can provide year-round utilization of collected solar heat, thereby significantly increasing the cost-effectiveness and energy contribution of solar installations. These systems are sized to provide 30% to 60% of building cooling requirements using solar, with the remainder usually dependent on TACS fueled by natural gas. The TACS available for solar-driven cooling include absorption systems and desiccant systems. Generally, solar cooling is not used because of the high initial costs of TACS and the solar fields needed to drive them.

Solar absorption systems use the thermal energy from a solar collector to separate a binary mixture of an absorbent and a refrigerant fluid. The refrigerant is condensed, throttled, and evaporated to yield a cooling effect, which is then re-absorbed to continue the cycle. Double-effect absorption systems (which use the heat twice in series) are about twice as efficient as single-effect systems but require significantly higher input temperatures. Because of the high-temperature requirements of absorption cooling systems, evacuated-tube or concentrating collectors are typically used.
Solar desiccant systems use thermal energy from the solar collector to regenerate desiccants that dry ambient air; they then use that dry air in indirect and/or direct evaporative stages to provide cooled air to the load. The solar heat is used to regenerate the desiccant, driving off the absorbed water. Some systems use flat-plate collectors at intermediate temperatures.